Introducing BWY guest writer (and my dear friend) Sherezad Rehman! Excited to share insight from his experience working, studying and backpacking in 30+ countries. Check out some key takeaways from his travels, and learn how these lessons led to one of the coolest experiences of his life…

There I was, on a sunny May day, standing in line at Court 2 of the famed Roland Garros anxiously awaiting to get a glimpse of my tennis idols in action at the French Open. I noticed the Spanish lady behind me pull out a tennis ball from her purse with a signature sprawled across it. Curious and eager to make conversation, I asked her in Spanish, “quien firmó esa bola?” (who signed that ball?)

I am exiting the “Players Lounge” of Center Court after spending the afternoon in a room with past and present tennis legends, still in disbelief of what I just experienced. I had goosebumps for 4 hours straight – I didn’t even know that was possible. From standing in line and feeling lucky to catch even one match, to mingling with my tennis idols, this is truly a story for the grandchildren.

As an avid tennis aficionado, I recently completed a summer adventure InterRailing through seven countries, starting with Roland Garros in Paris and culminating with Wimbledon in London. Not to forget about my experiences, every night I wrote down three memories from that day and one thing I was grateful for at that particular moment. Below are a few takeaways from the journal I kept this past summer that led to one of the coolest experiences of my life.

1. Backpacking is an Attitude. 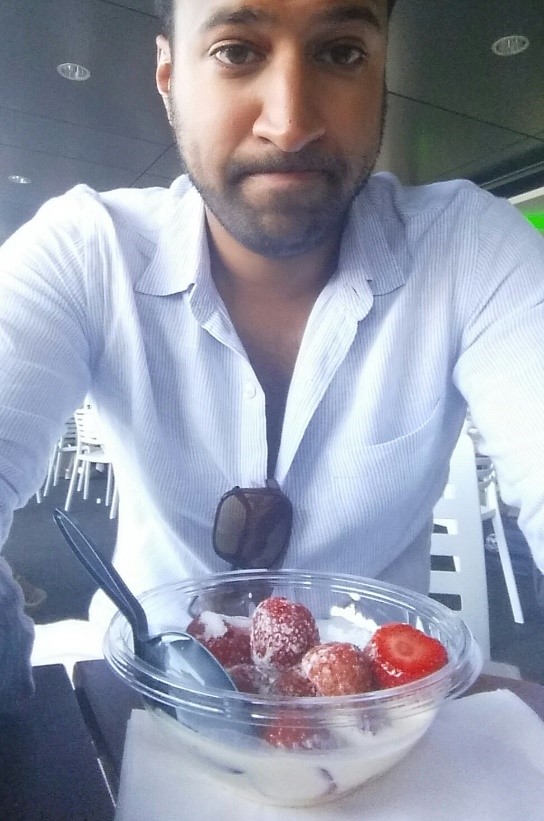 The famous strawberries and cream at Wimbledon are overpriced! – July 2015

One constant I found in my journal has to do with the diverse obstacles I faced throughout my travels. People are normally only exposed to the positive, social media worthy experiences which often portray an inaccurate representation of the roller-coaster ride that can be backpacking.

• Backpackers often won’t post a status update on how they had to walk for hours looking for their place on the cold streets of Budapest at night, completely lost, with 30 pounds on their back and sketchy sketches all around them… and of course, a dead phone.

• Backpackers generally won’t publicly blog about their lonely feelings when they are alone, a stranger in a strange land, and their family is celebrating a special occasion back home without them.

Rather, we normally hear about all of the amazing places backpackers see, the delicious food that they eat and the diverse people that they meet on their adventures; but ask the real backpackers about their excursions and they will tell you that it’s not all strawberries and cream. In reality, it’s filled with ups and downs, which is why I think backpacking is an attitude.

What I learned: I started each day with an optimistic mindset preparing for an adventure into the unknown, where there is no shortage of hardships, but once overcome, can lead to the prize (see Goosebump Effect below). I learned to embrace the challenges knowing that they will ultimately lead to those special moments. I opened my eyes in the morning and was grateful for the opportunity to experience the world.

Another constant I found in my journal has to do with having authentic experiences with locals and other travelers from around the world. When I say authentic, I am not talking about a basic conversation about the weather, where you’re from or what you’re studying. Instead, I am digging a little deeper until the apple hits me on the head. You know what I’m talking about. You can feel the moment. It can be a connection through an intellectual conversation or a “yes and” comedic improv moment where everyone is genuinely laughing about something they built together. One benefit of traveling alone is that you are almost forced to meet with new people. What I quickly learned is that people want to connect. This group of Brazilians standing in front of me as I was checking into my hostel in Budapest ended up traveling with me to Berlin and Krakow. I was coined the “Paki Brasilero” by them and we have a Whatsapp group mapping out our next adventure in Latin America.

So there’s an Italian, an American and an Austrian on the Thames River… (complete the joke)  – June 2015

These are unique relationships because they are very short but can be quite intense given the new experiences you are going through together.

What I learned: A majority of the people I met on my travels want to connect. So I try to get past the small talk and make my moment with other travelers the center of attention. The most important part is starting the conversation. Just say “Hello”. It can lead to some pretty amazing things.

3. Bask in the “Goosebump Effect”.

There will be moments during your travels when you realize that the world is a LOT bigger than you. I call it the Goosebump Effect. These are times when I’ve experienced goosebumps for hours straight. These are moments when you forget everything else and are just present and mindful of that particular moment. Even amongst all the chaos and craziness we see in today’s society, when you are basking in the Goosebump Effect, you realize everything is going to be alright in the world. It’s like these little happiness centers are ignited in your brain and your entire body feels right. When I experience this, I like to take a deep breath and snap a mental picture of that moment. Most people reach for their cameras to take a picture to post immediately on Instagram and Facebook. I think having that mental picture for the rest of your life is so much more powerful and rewarding. 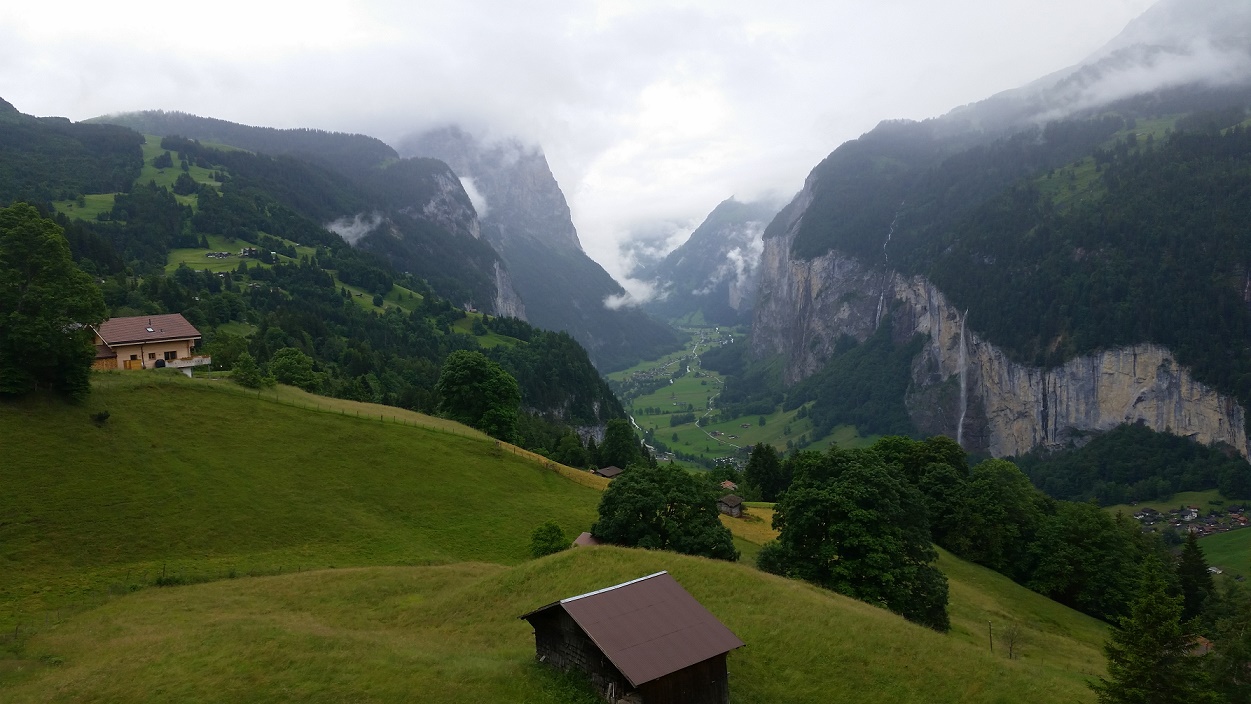 One example of the Goosebump Effect is from the story at the beginning when I asked that lady standing next to me in line at the French Open, “¿Quien firmó esa bola? – This simple “Hello” led to a conversation with a Spanish couple that was from Mallorca, Spain. The wife was a journalist and the husband was a cardiologist. They go to the French Open every year. We conversed in Spanish and English for the next 10 minutes while waiting in line for the tennis match and I told them about my experience living in Spain for a year. Little did I know that I had just started a conversation with Rafael Nadal’s neighbors. 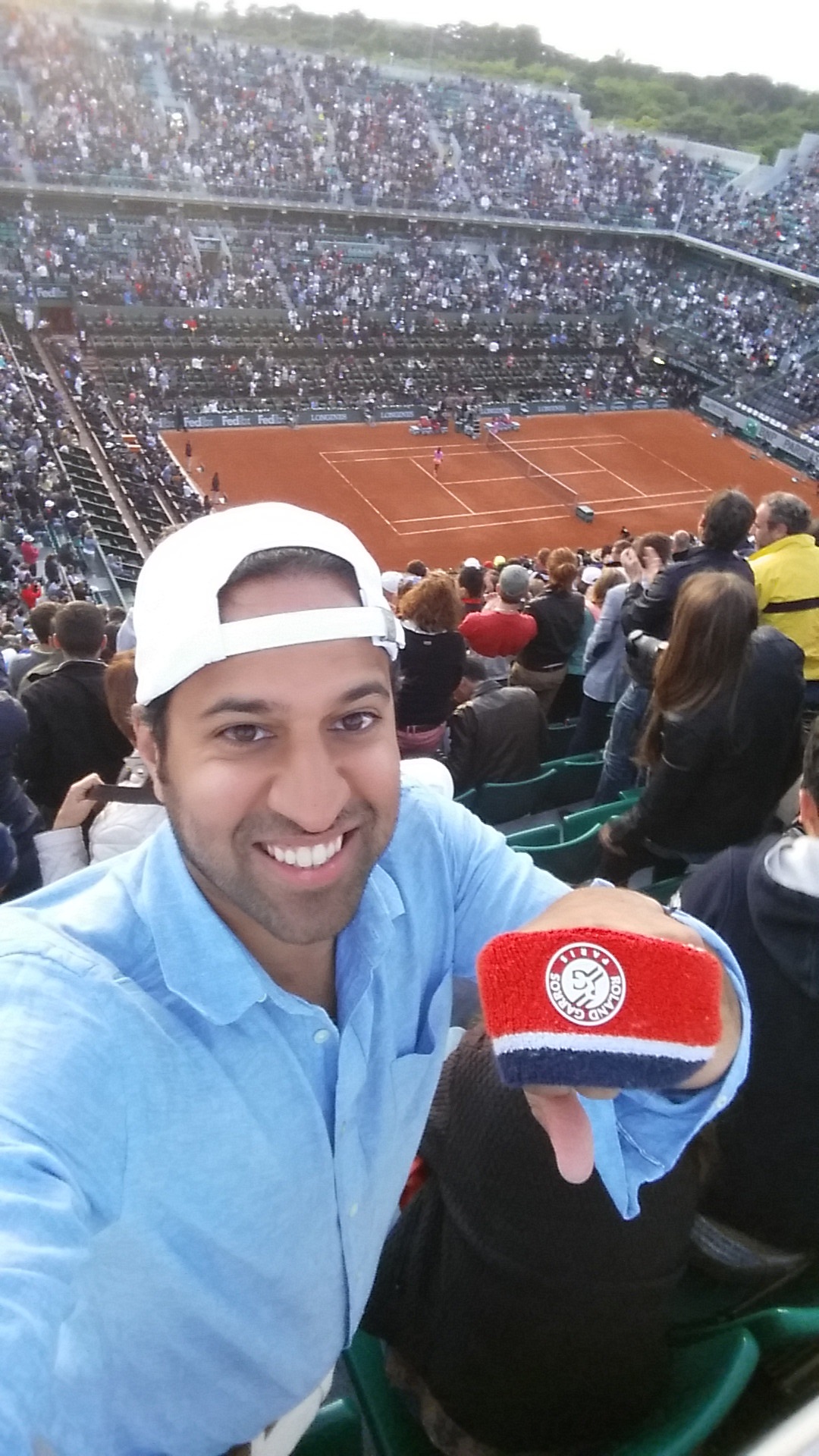 We entered the match together but were split apart due to the scarcity of seats. I thought I wouldn’t see them again. The match ended and as I was walking out I felt someone tap my left shoulder from behind. It was the husband. He whispered, “ven conmigo” (come with me). I followed him and he took me by this Haagen Daaz kiosk next to Center Court. He looked around and whispered to me that they were leaving the tournament for the day. He then ripped off a bracelet from his wrist and handed it to me. It said “Players Lounge” on it. He pointed to the entrance of the lounge next to Center Court.

I thanked him and tried to keep my cool, although on the inside I felt like a little Christian boy on Christmas morning (I don’t even celebrate Christmas). I wrapped the “Players Lounge” bracelet around my wrist and had to tie the ending since the adhesive had lost its stickiness. I walked up to the entrance and the large, serious gentlemen guarding the door took my hand and examined my bracelet. I thought I was caught. I was truly scared from the inside. I thought I was about to get kicked out of the tournament. He took a look at the date on the bracelet, gave me one of those head to toe looks, and moved to the side to let me walk in.

Man, was I lucky. It was one of the best feelings in the world as I entered this “Players Lounge”, still not sure what to expect. As I walked in relieved, the first person my eyes caught also happened to be one of the top 3 greatest female tennis players of all time, Serena Williams. I had instant goosebumps and thought, “Is this really where all the players hang out??” Over the course of the next 4 hours, amongst dozens of professional tennis players, I saw the greatest Brazilian tennis player of all time, Gustavo Kuerten (Guga) with his gregarious smile. Later, I saw a girl passing by with a denim shirt and white shorts. I thought to myself, “this is one of the most naturally beautiful women I’ve seen in my entire life”. Thirty seconds later it hit me. It was Ana Ivanovic. Everything felt alright in the world.

I was sitting down by myself in the Players Lounge with a cup of coffee, soaked in goosebumps and just completely grateful for this opportunity that came about by authentically connecting with another traveler. I pulled out my phone and sent a group text to my family – “The world is a really cool place. If you have the opportunity, go and get lost in it.” 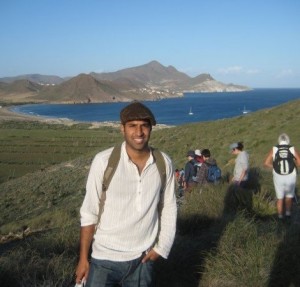 Sherezad Rehmann is an international business development strategist with seven years of sales, marketing and business development experience. A cross-cultural leader, Sherezad has experience working, studying and backpacking in 30+ countries, with a focus on Latin American markets. He is currently a Management Associate with LexisNexis Risk Solutions where he is working on various strategic projects as part of a rotational leadership program for his first two years.

Sherezad is also involved in the community, serving as the Chief Marketing Officer for OPEN Atlanta, a non-profit with 11 chapters dedicated to business leadership and entrepreneurship amongst its 4,500 members internationally. Sherezad has a MBA from Emory’s Goizueta School of Business and a B.S. from Georgia Tech. He enjoys tennis, improv and freshly squeezed juice.