Imagine the picturesque street vibe of Bruges, but take out almost all of the tourists and replace them with university students. This is Leuven, a town that somehow leaves all visitors with a feel of nostalgia, especially if you were lucky enough to go to school here.

Leuven for Bryan is something completely different, a past home and a journey back in time to his college-days. Though we’ve traveled the word extensively since his time living in Leuven (2001), this place is always special for him and I’ve grown to love it almost as much as he does. Belgium has a number of ‘small cities’, but none rival the fun-filled Oude Markt and exceptional beauty of Leuven’s City Hall.

On our first visit, we spent most of our time sitting in the Oude Mart drinking beer(s) and wandering the beautiful streets. It’s easy to walk the whole city, exploring small parks, old churches, the magnificent library, and quaint neighborhoods interlaced with cobblestone streets and canals. The squares are generally filled in the summer months, Oude Mart being the most popular and known as the ‘longest bar in Europe’!

Leuven is indeed a beer town (it is the home of Stella Beer). Belgium is world-renowned for it’s brews and I recommend trying a wide variety of beer flavors while you’re there, even if you’r not typically a beer drinker. Want something sweet? You can always default to a refreshing Kriek (cheery beer). 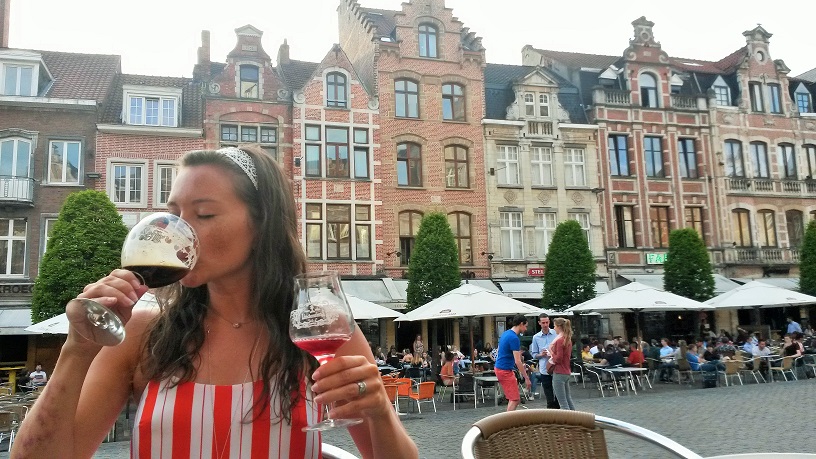 The squares hum with chatter from students basking in the rare Belgian sun and drinking countless beer. The rattling of bikes against the cobblestone add to the cacophony to delight the senses.

Leuven dining options are many, with both high-end establishments and a selection of affordable and easy restaurants. During the summer, most cafes cater to the long, sunny days with plenty of outdoor seating. It’s easy to catch live music in the squares on many summer evenings – making the ambiance even more magical. You can, of course, also find many bars and even a club or two, catered to students, if you fancy a late-night dance party 😉

Our trips to Leuven have been day trips. It’s a very easy place to visit from Brussels – just a 20 minute train away. Leuven days were spent walking the town, and enjoying the incredible architecture found on each charming street before heading back to the train station. Pictures don’t do this beautiful place justice, but let me lead you on a walk through Leuven and I’ll do my best….